And it was good just as it should!

Time – no friend of evolution

Although widely respected, the Grand Theory of Evolution is really quite preposterous.
Don Batten - 2015.10.23

We cordially invite everyone to participate in two meetings with pastor Derek Morris who unexpecte..
Media Team - 2015.10.19

When exploring and trying to understand Polish culture, the majority of the time the music of Fred..
Roman Chalupka - 2015.10.08

Watch now newest sermons from 3rd of October presented by pastor Michael Mohanu. Go back to top of..
Tomek Chalupka - 2015.10.08 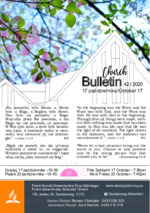