You know this is such a weird time, our whole life has been thrown out of order. It can be a challenging and frustrating time, I know I’m feeling it too. However, as I reflect, read, and think, this is also a time of great opportunity.

Learning from history we can see how two great thinkers of the past used a period of isolation to their advantage.

Both Isaac Newton and William Shakespeare used the time of isolation to produce some of their best work. You see Shakespeare was an actor and shareholder with The King’s Men theatre troupe when the bubonic plague forced London theatres to close in the early 17th century. This meant that the theatre industry was paralysed for much of 1606 when the plague returned to the city. After suddenly finding himself without a steady job and lots of free time, Shakespeare got to writing. He composed King Lear, Macbeth, and Antony and Cleopatra before the year was over.

A few decades after an isolated Shakespeare wrote some of his most famous plays, Isaac Newton found himself having to avoid disease in England. In 1665, when Newton was in his early 20s, one of the last major outbreaks of the bubonic plague hit the country. Classes at Cambridge University were canceled, so Newton retreated to his family estate roughly 100kms away to continue his studies there. He didn’t have to worry about responding to professors' emails or video conferencing into classes, and with zero structure, he excelled. The young mathematician produced some of his best work during his year in quarantine, writing the papers that would become early calculus and developing his theories on optics while playing with prisms in his bedroom. This was also the time when his theory of gravitation came about.

Both these men could have just stayed, carried on with life as it was and waited until it went back to normal. Instead they took the opportunity and did what they were created to do! They saw opportunity when others saw obstacles. They pushed through and in turn changed history. No doubt it wasn’t easy, but it was worth it.

What if we could seize this moment to produce some of our best work. What if in this quiet season we can drill down, draw near to God, and in turn produce some amazing things! What if we could grow in our understandings, our relationships, and knowledge. What if we come out of this better than how we entered? Last time I wrote I shared about getting into that quiet place. I firmly believe that it’s in the quiet places that God speaks. He forms us there, nudging and pushing us into the person He designed us to be.

It’s in the quiet and stillness of life that we can hear God speak and profound change can occur.

Psalms 46 simply reminds us “be still and know that I am God.”

While we can look at this season and be frustrated and upset, that’s not going to get us anywhere. Instead why don’t we take the most of this opportunity, try new things in new ways and see what happens.

God is still here, He’s still involved, He’s still working, probably in ways we don’t even expect or imagine, so let’s trust Him.

I hope these words helped. Remember I’m here if you need to chat! Only a phone call or a message away! 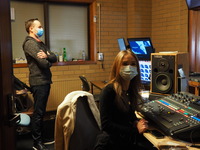