William Miller: preacher of the Advent

William Miller was an unlikely candidate for ministry. Born in the north-eastern United States in 1782, by his 20s he was more interested in making fun of preachers than in emulating them. Miller’s mimicking of his grandfather’s and uncle’s “words, tones of voice, gestures, fervency and even the grief they might manifest for such as himself ” provided gleeful entertainment for his skeptical friends.1

But even “endless glee” comes to an end. For Miller, the occasion was the war with Britain, which began in 1812. Captain Miller faced reality head-on as he saw good men around him die. On October 28, 1814, he wrote to his wife about a deceased friend: “But a short time, and, like Spen cer, I shall be no more. It is a solemn thought.”2 The hard facts of life were revealing the inadequacies of his skepticism and were pushing him toward the faith he had once so vigorously rejected.

By the summer of 1816, he at last had a desire to attend church, even though he wasn’t a Christian yet. But he consistently absented himself whenever the pastor was out of town, not being able to bear the agony of a poorly read sermon by a local deacon.
Then Miller made the mistake of telling his praying mother that he would always be there if he could do the reading.

Soon the still-skeptical Miller was regularly invited to read the sermons the deacons had selected. On September 15, 1816, he read one that so choked him up that he was forced to sit down in the middle of the message.

The aggressive skeptic had come to a spiritual crisis point. A few weeks later, as he put it, “God opened my eyes: and O, my soul, what a Saviour I discovered Jesus to be!”3 That discovery propelled the young convert into regular Bible study. Before long, he noted that the Bible “became a delight, and in Jesus I found a friend.”4

From that point on, the Bible became the most important book in the new convert’s life. Some years later he wrote to a young minister friend that “you must preach Bible, you must prove all things by Bible, you must talk Bible, you must exhort Bible, you must pray Bible, love Bible and do all in your power to make others love Bible too.”5 Miller practised what he preached, devoting massive amounts of time to Bible study. His goal was to begin with Genesis and study each text until he understood it.

That approach led him to understandings that both encouraged and frightened him. On the encouraging side, by 1818, his studies in the book of Daniel had led him to the conclusion “that in about 25 years ... all the affairs of our present state would be wound up; that all its pride and power, pomp and vanity, wickedness and oppression would come to an end; and that in the place of the kingdoms of this world, the peaceful and long desired kingdom of the Messiah would be established under the whole heaven.”6

Based on the time prophecies of Daniel, Miller had concluded that Jesus would return in the clouds of heaven around the year 1843. Concerning his conclusion, he wrote, “I need not speak of the joy that filled my heart.”7 William Miller had discovered the Bible truth of the Advent, a teaching that would make his name a household word in the United States in the 1840s.

That was the encouraging part of his discovery. The frightful part came with the conviction that he should do something to tell his friends about it. As he put it, “the question came home to me with mighty power regarding my duty to the world in view of the evidence that affected my own mind. If the end was so near, it was important that the world should know it.”8 But even the thought of having to preach the second coming of Christ or any other topic frightened Miller out of his wits. After all, he was not a minister or even comfortable as a public speaker.
And so he resisted conviction with all of his formidable strength.

He soon concluded, to his relief, that he needed to make sure he was correct.
As a result, he spent years more in Bible study. But he could not escape the conviction of personal responsibility. “Go tell the world” was the message that continually rang in his ears.

You can only hide from God for so long. Miller’s hiding came to an end in the early 1830s. One morning, as he sat down to study his Bible, the conviction that he needed to tell the world assailed him with special force.

He promised God he would do it if he had a specific invitation to preach the Advent message. With that he claimed, his burden was gone. After all, he was 50 years old and had never had such an invitation yet. Be careful what you promise God! Within an hour, a young man from a neighbouring village, who had walked 25 kilometres, showed up at his door.
His father wanted Miller to preach on the Second Coming the next day.

“I was,” Miller reported, “immediately angry” for having made the promise to God. Stomping out of the house, Miller tells us he “retired in great distress to a grove nearby. There I struggled with the Lord for about an hour, endeavouring to release myself from the covenant I had made with Him; but I could get no relief. It was impressed upon my conscience, ‘Will you make a covenant with God, and break it so soon?’”9

Finally surrendering to God, the next day Miller preached his first sermon. It was a success. And thus began a chain of preaching that would eventually take a lay Baptist farmer to podiums in both villages and great cities, such as New York, Philadelphia and Boston. William Miller, in a little more than a decade of preaching, would become one of the best-known preachers of his day.

But he didn’t do it by himself. Standing by his side and pushing him forward were a host of other preachers, who caught his vision for Christ’s soon coming. Chief among them was Joshua V Himes, described by some as the “Napoleon of the press.”10 Within a few short years, Himes had blanketed the United States with millions of tracts and books on the Advent, and sent them to every Protestant mission around the world.

By 1843 and 1844, tens of thousands had accepted Miller’s Advent message, with perhaps a million more expectant.11 They were convinced Jesus would come on October 22, 1844.
But Jesus didn’t come.
Had Miller failed? In one sense, yes.

But a restudy of the prophecies by his followers in the late 1840s demonstrated that while he had been wrong about the event to take place during 1844, he had not been in error regarding the great flow of prophetic history.

Six denominations have risen out of Millerite Adventism, the strongest being the 16-million-member Seventh-day Adventist Church, which still feels the burden to tell the wonderful message of the Advent to a world in desperate need. Today’s Adventists still believe they have a special message to preach to “every nation, tribe, language and people” (Revelation 14:6) before Jesus comes again.12

This article has been translated, and was first published in English in Signs of the Times magazine.
Source: http://www.signsofthetimes.org.au/items/william-miller-preacher-of-the-advent 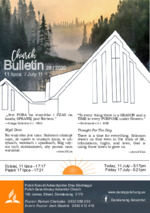